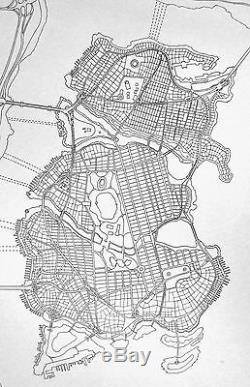 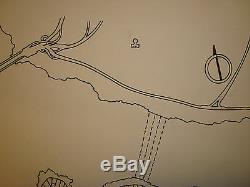 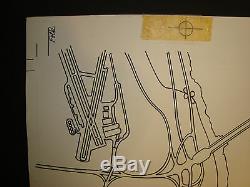 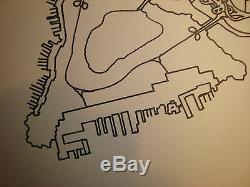 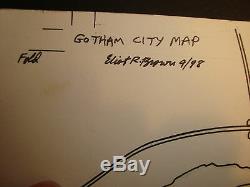 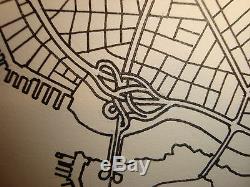 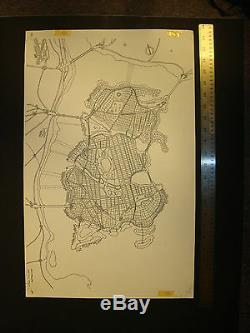 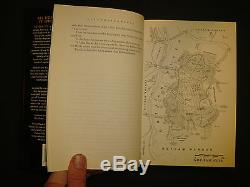 Very High Contrast, Clean Work. 23" X 14 1/2" (58.4 cm x 36.8 cm). Read the Gotham City Map Story. Read the Smithsonian Magazine Article on The Cartographer Who Mapped Out Gotham City. Who remembers DC Comics' Cataclysm? There were so many criminals in Batman's Gotham City that it was cut off from the mainland and became some sort of prison. And then Commissioner Gordon stayed behind in the only police station left to control all the criminals. And - The Batman was nowhere to be found! In fact, when he was last seen (for quite a while in the series) he and Robin, were vanishing down a hole that appeared when the Batcave collapsed during an earthquake.

This appeared in Batman - Detective Comics - only a few years ago. "Cataclysm" was one of those interesting ideas. Some say turgid melodrama with artificial tension.

Some say "Escape From Gotham City" -after the John Carpenter classic, "Escape From New York"... But someone must'a liked it - because it got a year's worth of storyline across several titles.

It's been printed and re-printed in DC comics, some of the lavish DK Publishing books about DC and in a book. Betcha didn't know it was an island - similar to, but not quite like the five boroughs of New York City. Which NYC borough is attached to the mainland! I was brought into the Manhattan offices of DC Comics, where I feverishly took notes of what was to appear. I threw out a few ideas of my own - my knowledge of NYC's own steam and railroad tunnels was applied to Gotham.

You see, the bridges and subway tunnels that connect the mainland to Gotham were destroyed... Yes, you might say, just like in Escape From New York.

But unlike even those legendary movie-makers, they didn't have a student of New York City's peculiar underground world to contribute to the cause. But comics did - me. If Batman needed to get into town on the downlow, he could get in using any number of little-known tunnels and tunnel ventilation shafts. But that's not all the stuff I added. I put in analogs of many big cities to round out Gotham.

We may never need to visit the different corners of this Gotham. Like NYC, it's large enough to contain multitudes.

Which brings me to the reason we're all here. This original piece of artwork can be yours. When you finish laughing, think it over. A piece of history-sure, local, narrow focused and imaginary - but history nonetheless. This is Gotham City after all, a place most comic readers have set foot in.

Alongside various heroes and villains, we have lived with them in this imaginary world. As real to us, sometimes more so! Than the veil of tears you and I are stuck with out here. The Joker schemes and bedevils The Batman -right here!

Clayface, Bane, Two-Face - all of them - hard at work - right here! You know where - you've been there many, many times.

Know the location of stately Wayne Manor.. Read more about the making of this map in the The Gotham City Map Story. For the past decade, this has been a part of the "bible" given to most comic artists at DC. It was included as a "bonus" in the novelization of the comic "Cataclysm" storyline: Greg Rucka's Batman No Man's Land.

I may not remember how many thingies are on Thor's breastplate, but by gum I can tell you how many leather twists there are on Uru! I toiled noisily in the comic industry for many years, several decades, doing "tech pages" for Marvel, DC and many other popular comic houses.

I brought a keen awareness of screw threads, the lever, the integrated circuit and other matters too technical to mention -to comics. You may have seen my work: The Official Handbook Of The Marvel Universe, The Iron Manual and The Punisher Armory. This artwork was done over-sized, 23" x 14 1/2" (58.4 cm x 36.8 cm), (normal comic these days is on artboard that is 11x17) because it was a big project that needed a lot of detail.

The art is basically black ink on Strathmore double-weight board - very high contrast, clean work. I worked hard assembling research material, taking notes, making sketches - so that you, the reader could feel they were there. Needing to go from downtown to up or crosstown to beat traffic. Note that there are no street names and such on the artwork. It is them I blame for not reattaching it. Of course the art will be packed with a piece of plywood, made waterproof and insured for transit. The package will be wrapped in plain brown paper to be made nondescript. The Smithsonian Magazine Article on The Cartographer Who Mapped Out Gotham City. The item "Gotham City Map Original Art Unique! Batman Joker" is in sale since Monday, January 2, 2012. This item is in the category "Collectibles\Comics\Original Comic Art\Other Original Comic Art". The seller is "apinkingston" and is located in Kingston, New York. This item can be shipped to North, South, or Latin America.