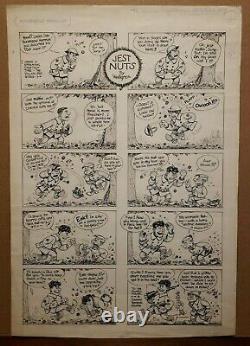 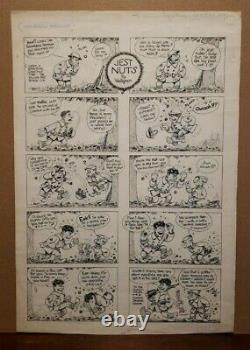 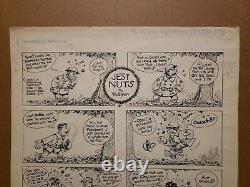 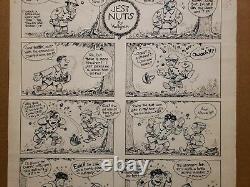 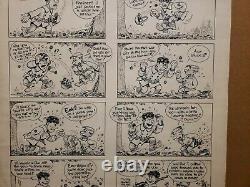 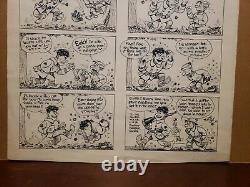 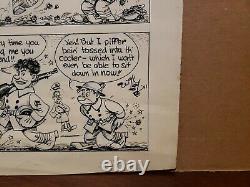 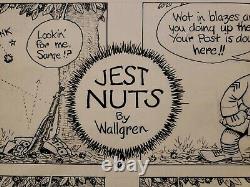 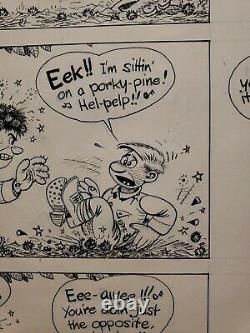 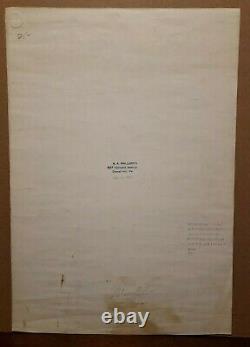 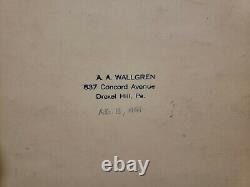 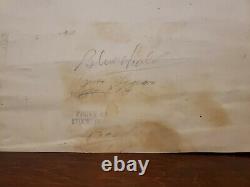 Medium: Pen and ink over pencil/graphite on art board. Publisher: The American Legion Magazine. 4 (10/1941) as per the TAL Digital Archive. Dimensions: 14.25" wide by 20.5" tall (board dimensions; image slightly smaller). The title "Jest Nuts" and "by Wallgren" are hand rendered.

This complete one-page story was published in the October, 1941 issue of the American Legion Magazine. Titled "Jest Nuts", Herman is on guard duty while in the army and has a craving for some spiky chestnuts. His sergeant comes to check up on him, and things go south quickly from there. Wally Wallgren was a cartoonist for the Philadelphia Public Ledger and Washington Post before WWI, creating the comic strips "Inbad the Sailor" and "Tired Timothy".

Wallgren served in France as a Stars and Stripes staff cartoonist during WWI and continued working as a magazine cartoonist during the 1920s and 1930s. He created the eternal screw-up, HOOSEGOW HERMAN, in 1938, and it ran as a daily and Sunday strip from 1938 through 1940, syndicated by the McNaught Syndicate. Wallgren had great difficulty in meeting deadlines, and he was fired, with the strip ending in 1940. Herman, however, found a new home in The American Legion Magazine, where Wallgren had published cartoons and comics for many years. Wallgren's stamp (name and address) is on the reverse with the hand written date Aug.

16, 1941 as well as additional stamped and hand written editorial notes. A cute gag well rendered by Wallgren. The art is in excellent overall condition. Stamps, notations, pencil notes and toning/discoloration to reverse. Please check my other listings for a selection of books, graphic novels, original comic art, CDs, DVDs, knives, and other collectibles. This item is in the category "Collectibles\Comic Books & Memorabilia\Original Comic Art". The seller is "rfcarlinii" and is located in this country: US. This item can be shipped worldwide.