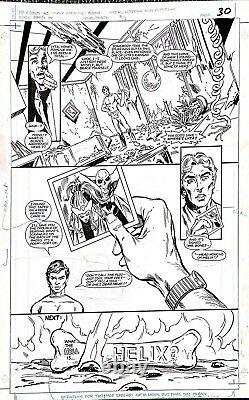 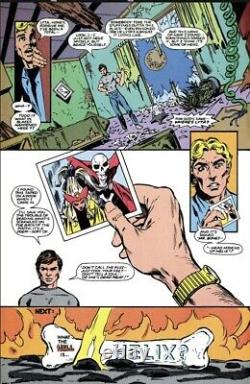 Up for sell after 20yrs in my'McFarlane original art vault' is page 24 from Infinity Inc 16. Early in his career, Todd's first gig was a 2yr stint at the DC book Infinity Inc. Todd's run started in issue 14, so this is the second issue of his run and basically his career. What's fun about this art is you can see the early spark of creativity that led Toddy to explode on the scene, get the helm of not only Amazing Spider-Man, but then his own book, Spider-Man and then famously he left the'Big 2' to start Image comics where he continues to helm both the company and his own creation Spawn through over 300 issues. That's today, let's go back again an amazing 36 years to Infinity inc 16 pg 24.

Infinity Inc is a team book and Fury is one of the recurring members of the team. While changing into her costume, a strange new character that is basically a skeleton appears. This is none other than Mr.

In fact, this issue is his debut and it's called They Call Him.... Those of you that are following the DC Cinematic Universe and watch the popular Stargirl TV show may recognize this because 36 yrs later Mr. Bones has worked his way onto the screen. On this page we see Todd already breaking with traditional'panel pages'. In the splashy top area we have a Fury's trashed room after the big fight with Mr.

Todd Rice (Obsidian) and Hector Hall (Silver Scarab) come in to see Fury to find that she's gone. They find a polaroid (long story - they used to have this thing called film, but I digress) and in there they get a message from Mr. Bones that he has Fury and that he calls himself the "Head Honcho of Helix".

Cut to the bottom teaser panel with a burning bone with the words What the H is HELIX? I've provided a high quality scan you can zoom in on, and scan of the page as it appeared in the comic, reduced in size and colored. This is original art, not a print or color guide, nor artist sample or anything like that, this is a 1:1 artist creation. The item "Infinity Inc #16 pg 24 Original Art by Todd McFarlane with Mr.

Bones/Fury (1985)" is in sale since Tuesday, November 30, 2021. This item is in the category "Collectibles\Comic Books & Memorabilia\Original Comic Art". The seller is "scotrover" and is located in Raleigh, North Carolina. This item can be shipped worldwide.