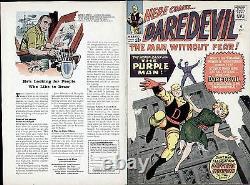 And check out OUR NEWLY LISTED ITEMS. This is an original cover proof for Daredevil #4, published by Marvel Comics in October of 1964, and featuring cover art by Jack Kirby. This is a full-color single sheet printed proof of the cover, including both the front and back covers, and with printing on both sides of the covers, the same way it looks in the published comic.

It measures approximately 10 1/2" by 14". Please note that this is NOT a mass-produced print or lithograph, or for a more recent reprint.

It is a cover proof that was created during the production process for the comic, and used internally by the comic company. The piece is in good condition, particularly considering the incredible age of the piece almost 50 years old! , but does have some general wear, along with a few small color tape pulls (these can be seen in the scan if you look next to the #4 box at the upper right, on the top of the building at the middle-left and on the building next to DD's knee). The piece has been trimmed on the sides down to standard comic book size, and it is overall in good shape. The cover features probably one of the greatest Dare Devil images Jack "King" Kirby ever did, with DD shown in a fantastic straight-on image as he practically leaps out at you right off the cover!

This is a super-early issue, featuring DD still in his original yellow costume (before he later switched to red), and is the 4th-ever appearance of The Man Without Fear. The villain The Purple Man is shown in the background, and made his first appearance in this issue. To say that this piece is rare would be a truly major understatement.

Silver Age Marvel production art is extremely scarce, particularly since there was no Marvel equivalent to DC's Jack Adler that made a conscious effort to save production pieces. So there is generally not believed to be nearly as much Marvel SA prod. Artwork still in existence, as there is in the Adler collection of DC pieces. Most Marvel production pieces you see are either from reprints or foreign editions. And to get a significant piece from the early classic 1960's Stan Lee and Jack Kirby time period is a truly rare find. And a cover this early the 4th issue!!! In a major well-known series is practically unheard of. An exceptional and unbelievably rare piece of comic production art, that would look great framed, and be a true key piece in any collection.

Please note that this is an authentic piece from the 1960's, not something made for a later reprint or collection book. We have been told there are reprint production art pieces being listed by other sellers that make them seem to be old and from original printings, even though they are not for example, older production art did not have the words on a separate sheet from the images. Those kinds of things were only done much more recently, using computer technology. We advise buyers to be careful, as there are disreputable sellers tricking many people into believing they are purchasing items that are older and more valuable than what they actually are. Some sellers simply do not state their items are from reprints, while others make very long listings and put a tiny mention about reprints buried deep in the listing, and/or use a hard-to-read font color (like yellow) to prevent buyers from seeing this information.

Unfortunately, everything else in the listing the title, pictures of the cover of the comic from the 1st printing, etc. This item is a genuine proof from the'60's, not something made for a reprint. Check out our other auctions for more great items. Check it out, you'll be glad you did!

The seller is "satchj3" and is located in Brooklyn, New York. This item can be shipped worldwide.