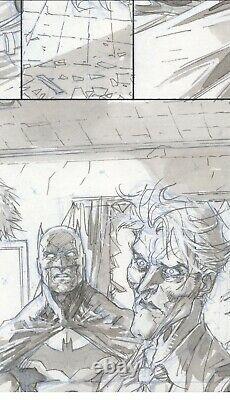 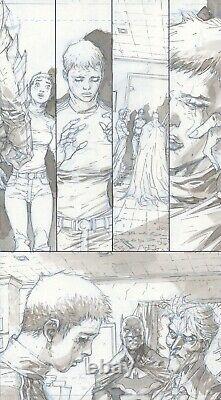 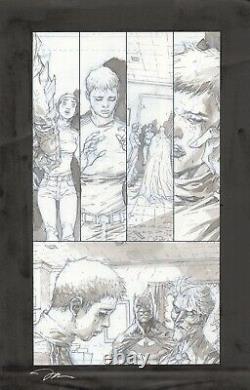 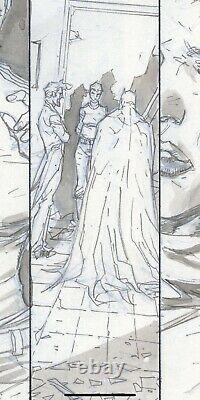 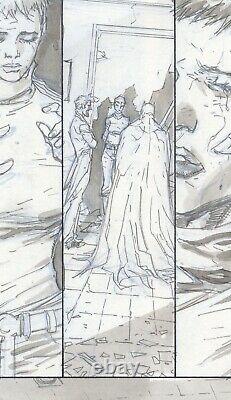 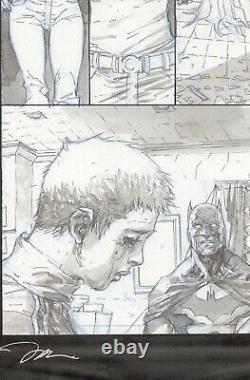 Jim Lee & Giuseppe Camuncoli Batman Europa #1 Story Page 29 Original Art (DC Comics, 2016). Batman and the Joker showdown on this page by superstar artist Jim Lee, a modern-day Batman fan-favorite artist. From Giuseppe Carmunicoli's great layout, Lee rendered the pencils and the finished ink and ink wash work on DC Bristol board. The wide black margins give the page an image area of 9.5" x 14". Signed by Jim Lee in lower left, and is in Excellent condition. This page from Batman: Europa #1 features Jim Lee pencils and finishes over Guiseppe Camuncoli layouts. The page features Batman in Berlin where he encounters the Joker while attempting to interrogate a computer hacker named Nina. Batman: Europa came about because Jim Lee took a trip to Europe and met some artists he wanted to work with. It was initially scheduled to come out in 2005 but got stuck in development for 11 years and finally came out in 2016. It's the story of how Batman becomes infected by a fatal virus and travels to Berlin in search of a cure where he finds the Joker, who has also been affected. They must work together to survive. Note: The art has an image area of approximately 8" X 12.5".

There is a bend/crease to the art board that does not break the color of the pencil and ink lines or the watercolor of the artwork itself. This extends diagonally, starting from 6.5" from the top edge on the left side to 2.5" on the right side of the board. There is also some beveling to the board at the very bottom (black) edge, outside of the artwork area. Signed by Jim Lee, lower left.

Jim Lee is the #1 artist of our time and has been in the comic book industry for over 30+ years now. He got his start working for Marvel in the late 80s, illustrating Alpha Flight before shooting to superstar status on Uncanny X-Men. In the early 90s, Lee and several other artists formed their own company, Image Comics, to publish their creator-owned titles, with Lee publishing titles such as WildC. S and Gen13 through his studio, Wildstorm Productions.

From 2010 to a couple of months ago, Lee was Co-Publisher of DC Comics, overseeing the successful New 52 and Rebirth initiatives. His new role is Publisher and Chief Creative Officer and he's currently the spokesperson for the company.

Hopefully the new gig will give him more time to draw! Guiseppe Camuncoli is an Italian artist both known for illustrating many issues of Amazing Spider-Man and Superior Spider-Man. Here at Holy Grail Collectibles we focus on only the rarest items, the best of the best and most sought after collectible Comics, Disneyana cels and drawings, Art and Memorabilia. Feel free to reach out with any questions or anything I can help with. The item "JIM LEE BATMAN EUROPA #1 PAGE 29 ORIGINAL ART BATMAN INTENSE JOKER IMAGE PG" is in sale since Friday, May 28, 2021. This item is in the category "Collectibles\Comic Books & Memorabilia\Original Comic Art". The seller is "holygrailcollectibles" and is located in San Francisco, California. This item can be shipped to United States, Canada.