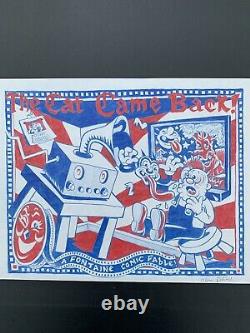 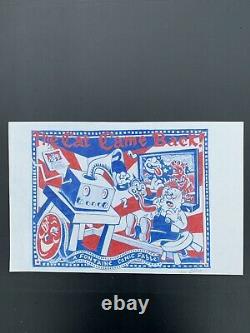 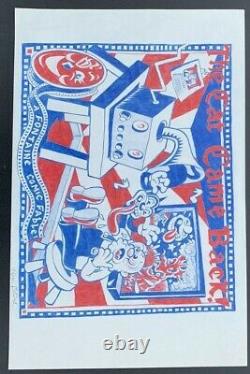 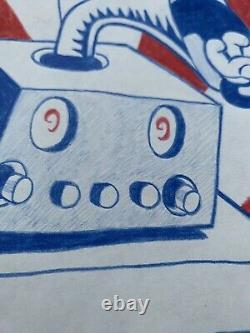 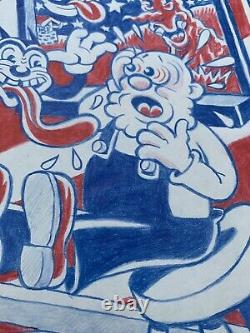 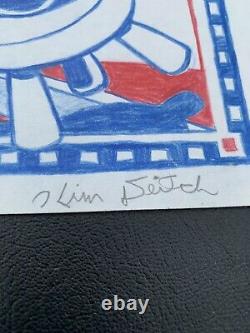 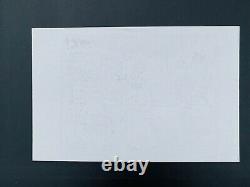 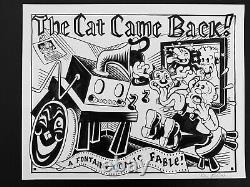 Provenance: Amity Arts Foundation Inc. This work is titled The Cat Came Back and features Deitchs well known character Waldo the cat coming out of the speaker.

We are unsure as to what series this comic art piece is from. We have included one picture of that piece for your consideration. This sale is just for the one color original work.

Image - 10 x 13. Kim Deitch (born May 21, 1944 in Los Angeles) is an American cartoonist who was an important figure in the underground comix movement of the 1960s, remaining active in the decades that followed with a variety of books and comics, sometimes using the pseudonym Fowlton Means.

Much of Kim Deitch's work deals with the animation industry and characters from the world of cartoons. His best-known character is a mysterious cat named Waldo, who appears variously as a famous cartoon character of the 1930s, as an actual character in the "reality" of the strips, as the hallucination of a hopeless alcoholic surnamed Mishkin (a victim of the Boulevard of Broken Dreams), as the demonic reincarnation of Judas Iscariot; and who, occasionally, is claimed to have overcome Deitch and written the comics himself. Waldo's appearance is reminiscent of such black cat characters as Felix the Cat, Julius the Cat, and Krazy Kat.

The son of illustrator and animator Gene Deitch, Kim Deitch has sometimes worked with his brothers Simon Deitch and Seth Deitch. Winsor McCay, Chester Gould, Jack Cole, and Will Eisner; he attended the Pratt Institute. Before deciding to become a professional cartoonist, Deitch worked odd jobs and did manual labor, including with the merchant marine. Searching for a path, he at one point joined the Republican Party; at another point he became devotee of Hatha yoga. Deitch regularly contributed comical, psychedelia-tinged comic strips (featuring the flower child "Sunshine Girl" and "Uncle Ed, The India Rubber Man") to New York City's premier underground newspaper, the East Village Other, beginning in 1967. He joined Bhob Stewart as an editor of EVO's all-comics spin-off, Gothic Blimp Works, in 1969. During this period, he lived with fellow cartoonist Spain Rodriguez in a sixth-floor walk-up apartment in New York's East Village.

Deitch was also a publisher, as co-founder of the Cartoonists Co-Op Press, a publishing venture by Deitch, Jay Lynch, Bill Griffith, Jerry Lane, Willy Murphy, Diane Noomin, and Art Spiegelman that operated in 19731974. Deitch's The Boulevard of Broken Dreams was chosen by Time magazine in 2005 as one of the 100 best English-language graphic novels ever written. In 2008, the Museum of Comic and Cartoon Art featured a retrospective exhibition of his work. The item "Kim Deitch Original Color Underground Comic Art. The Cat Came Back Waldo.

Signed" is in sale since Thursday, May 16, 2019. This item is in the category "Collectibles\Comic Books & Memorabilia\Original Comic Art". The seller is "upstatetreasures14" and is located in Kingston, New York.