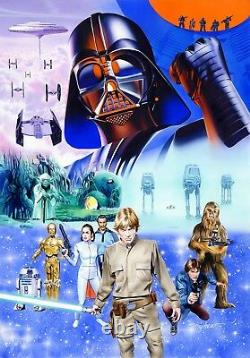 The piece measures a whopping 15" X 22" on archival 140lb Fabriano Artistico hot press watercolor paper. The art is entirely done by hand, and painted with brush and airbrush in lush tones with tons of rich detail. Depicted is the main cast and locations from the classic STAR WARS film: THE EMPIRE STRIKES BACK!

And an 8.5" X 11" glossy artist's proof of the final published art signed by Mike. Also included is a signed copy of the actual card that appeared in the set.

This art is an incredible value for the size, the high-profile nature of all the characters appearing in one image, and the subject matter which is what most consider the greatest STAR WARS film of all time! Visit comic art fans for a complete gallery of Mike's original art.

Other auctions are in our store right now. Follow Mike on Tumblr, Twitter and Facebook where he posts new art, old art, and announcements every day!

The item "Mike Mayhew Original Topps EMPIRE STRIKES BACK Painted Card Art" is in sale since Monday, April 23, 2018. This item is in the category "Collectibles\Comics\Original Comic Art\Covers". The seller is "mikemayhewstudio" and is located in Los Angeles, California. This item can be shipped to United States.