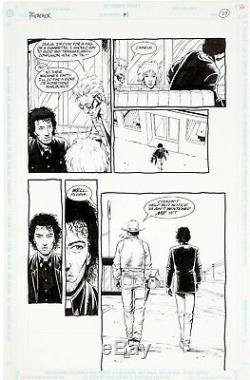 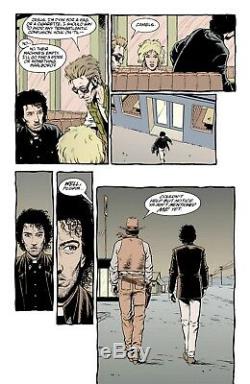 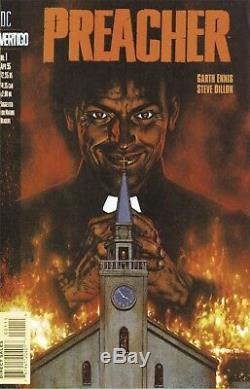 Original artwork by Steve Dillon to Preacher #1 (4/95), page 38. On this page we see the first appearance of the "Duke, " who is the John Wayne-like imaginary friend who appears to Jesse in his times of greatest need.

The Duke scenes comprise perhaps the only moments of calm and normalcy in the insane reality of Jesse Custer. He made the weeks spent in the horrifying underwater coffin bearable, and he gave him critical advice and information throughout the series. This panel is the only appearance the Duke made in the first issue, and we unfortunately never know the first conversation in the comic that Jesse has with him.

Preacher is one of the most important comic books of the 1990s, and Preacher #1 is among the most sought-after comic books of this period. This page contains, in addition to the first appearance of the Duke, appearances of the three main characters. It is one of the best interior pages from the first issue, if not the best. The instant cult-classic AMC show has expanded the base of Preacher fans and made original Steve Dillon artwork much more difficult to obtain. Page is 10" x 15"... First Print reading Copy of Preacher #1 included too. The item "Preacher #1 ORIGINAL art page Garth Ennis Steve Dillon John Wayne Jesse Custer" is in sale since Monday, December 17, 2018. This item is in the category "Collectibles\Comics\Original Comic Art\Interior Pages". The seller is "benkin" and is located in Staten Island, New York.