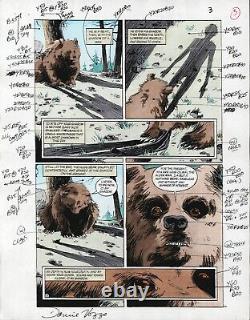 Original Hand-Painted Comic Artwork From.. Issue #: 44 Date: October 1992 Artists: Daniel Vozzo Publisher: DC Comics Notes: Signed by Artist. From The Time Before Desktop Publishing. In the days before comics could be created entirely on computer - around the year 2000 - every comic had a one-off first issue - and unlike the thousands of printed copies available for sale later, the first one was entirely hand-painted and assembled by hand. Once the pencilled / inked art is completed, an 8.5" x 11" print of each page is taken and sent to the color artist (or colorist) who chooses from a palate of 64 color paints how best to color the comic - the characters, what they wear, backgrounds, everything!

A comic's success can depend on this artist, creating the first look of how the page will appear once printed. All these details are decided upon, and notation codes are added to this art usually by the colorist. This first issue of the comic becomes the template, with the editor signing off (literally) the final look, and it instructs the printing company on the inks and percentages of to be used in each panel - notes on the percentage of each CMYK color are included, either by the editor or artist, and often written directly on the art.

This is repeated for each and every page - A comic book may have a print run of 100,000 copies or more, but only the first completed issue is painted entirely by hand! This is a Piece of one of those First Issues! Desktop publishing has today replaced these traditional methods, and this art is now part of a lost tradition. This artwork is an original part of the first hand-created issue for the comic pictured! For 40 years color in the American comic industry used a simple, hand separated 4-color (CMYK) system.

The possible combinations of these tints gave colorists a palette of 64 possible colors to use in the books, though most used no more than half of these. Many of the darker colors were indistinguishable in print limiting the palette to 64 colors kept printing costs down, and were about all that could easily be reproduced on the cheap newsprint paper used at the time. Airbrushing and special colors/effects were reserved for covers, which were heavier coated paper stocks.

Example: To create a light green, for instance, a code of Y2B2 was used. This meant that 25% of Yellow (Y2) and 25% of Cyan (B2) are needed to get that color. In order for the color guide artists to be able to communicate with the color separators, charts of the 64 colors with their codes were printed and distributed to the colorists. Photographic prints, or later Xerox, copies of the original art were made at 8 ½" x 11", and the colorists often used special 64 color sets of Dr. Martin's radiant transparent watercolor (or aniline dyes) to color them.

Then they would write codes from the chart on the guides, which the separators used to know which color the guide artists actually wanted. (As opposed to guessing) and were sent to the color separator. The separator, which for much of comic's history was Chemical Color Plate in Connecticut, would make nine acetate prints of the original art, one for each percentage of each color.

The black and white artwork - originally drawn at twice the printed size, then 1½ times, and currently slightly less than that -- was photographed, reduced and printed on sheets of clear acetate. Nine copies were made of each page - one for each of the three percentages of the three colors - and these were turned over to a separator. Using the colored artwork as a guide, areas on the acetates would be filled in with an opaque paint (Rubylith) to correspond to the color(s) necessary. Once the color guides were fully "translated" and the acetates were finished, they would be photographed with appropriate screens to create a single version which included the percentage dots and the solid of one color.

These three new pieces of film, along with a fourth clean version of the art which was used to make the black, were used to make the printing plates. This item is in the category "Collectibles\Comic Books & Memorabilia\Original Comic Art".

The seller is "destinyone" and is located in this country: GB. This item can be shipped worldwide.