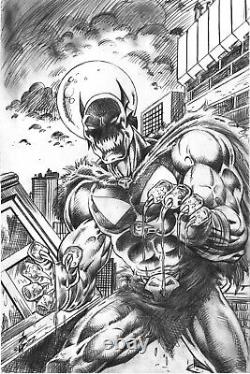 Coming soon CASTLE of DRACULA 11.7x16.5 on bristol board! The nephew of legendary illustrator and artist Earl Moran.

Burcham is listed in Jerry Bails Who`s Who of American comic book artists, The Comic Book Super Stars published by Krause publications, and the Italian art book glamour, featuring the best fantasy artists worldwide!! Friends insisted Wolverine was a bad name for a hero and the character evolved into Night Wolf, Dark Wolf and now Darkwulf The Hellwarrior. It was also at this time he began submitting work and getting paid from small comic book fanzine publishers of the time. After completing High school, where he majored in electronics and won multiple championships as a wrestler, he was offered a scholarship to the renowned School of the Art Institute of Chicago.

Due to financial considerations he was forced to accept a wrestling scholarship at his local college Southern Illinois University. While attending he had a short tutelage under famed cartoonist, Professor John Adkins Richardson. Burcham left college and joined the U. Navy after a fine arts teacher insisted that Frank Frazetta was not an "ARTIST". While serving in the Navy, he trained as an aviation electronics technician, but the art world pulled him back in as he was needed to work on classified materials that required a massive amount of illustration.

It was his pleasure to meet and work with famed fine artist Ben'h Usry, who taught him much about the philosophy of art. Upon his completion of honorable service to the U. Navy, he used the G. Bill to attend the The Midwest School of Lettering, Art and Design, where he soon became an instructor for the night classes and top student of the legendary Lonnie Tettaton. A very long list of assignments followed doing advertising and billboard designs, as well as several stints as an art director for advertising agencies and retail chains in the St.

Still, comics and fantasy artwork were always the main focus of desire, so he and writer Gerald Brown, with artist Charles Pitts, created a semipro fantasy mag Night Voyages, that featured many outstanding local and national talents, including Rick Burchett, Paul Daly and Clyde Caldwell. Tony Dezuniga saw a copy of the book at a local printer and gave him a call to be his assistant inker on Savage Sword of Conan, Jonah Hex and Caleb Hammer!!

Tony worked at a breakneck pace of at least 4 pages a day. Burcham gave up a very lucrative job of art director at a local retail chain and inked a pile of pages with his mentor.

Once the pages were completed and Tony left town, it was back to advertising and art direction for awhile. Still, he was doing samples and sending them to New York, where both Jim Shooter at Marvel and Joe Orlando at DC were interested. Warren comics sent a script to work on, but closed down before completion of the work. Then, after a meeting with Dick Giordano at a Chicago Comic Con, he became part of the brand new DC COMICS new talent program. Progress in the New Talent program was very slow with a revolving door of editors that all had different ideas of the good and bad of comics, but the burgeoning independent press was abounding with offers!!

Fantagraphics Press chose him as the inker for John Wooley and Terry Tidwell's Miracle Squad. He was already inking their Twighlight Avenger book for Elite Comics as well as Elite's Sea Dragon book by Dennis Yee. Soon he offered up Night Wolf with writer R.

Jones for one issue before Elite emploded. It was back to art director at a Tulsa based outdoor advertising agency for awhile, but then once again the comics came a calling when Mark Waid pointed Malibu Comics his way to sign up for a 4 issue mini series of the revamped Night Wolf that became Dark Wolf, written and co-created by R.

Malibu merged with Eternity Comics and Dark Wolf became a monthly series there along with a 4 issue mini series co- created and written by R. Jones, The Fist of God.

Of course that wasn't quite enough work for the prolific Mr. Burcham, so he also took on the inking of their Liberator series as well. Always seeking higher ground Mr.

Burcham created his own publishing company Comax Productions where he published such titles as, Fana the Jungle Girl, The Scarlet Zombie, Dober-Man, Stargators, Warmaster, Biff Gorgon, Dracula the Impaler and Zorlanda Queen of the Darkblade. All distributed to comic book stores worldwide by Diamond Comics and several other existing distributors of the time. After the demise of every distributor besides Diamond, the market for small independent publishers soon became extinct. Mr, Burcham then began picking up freelance work again, including illustrating Queen of the Black Coast and the Conan World Book, for Steve Jackson Games, A portfolio featuring Savage sword of Conan alumni Alfredo Alcala, Rudy Nebres and Ernie Chan and a couple of comics for Conquest Press and inking an issue of The Green Hornet for Now Comics. Lightning really struck big when the toy industry came calling in the guise of Trendmasters Inc.

Initially hired to draw trading cards and produce a comic book for their Godzilla toy line, Mr. Burcham soon became their top illustrator and eventually Senior designer on hundreds of toy lines and digital comics such as Godzilla, Tarzan, At the Earth's Core, Species, Mars Attacks, Lost in Space, Gumby, Casper, Barney, Cartoon Network, etc. Plus millions of dollars worth of Halloween and Christmas items.

Once ending his successful tenor with Trendmaster he illustrated an issue of Cavewoman for Caliber Press, but soon found himself buried in commissions and online art sales that amounted to 20 years and over 20000 sales of original artwork online!! With the new wave of publishing quickly evolving on Kickstarter, Mr. Burcham is never found far from his drawing board and easel, as his mind abounds with new ideas for new projects everyday!

Thank You, to all my fans who help me explore this exciting new horizon! This item is in the category "Collectibles\Comic Books & Memorabilia\Original Comic Art". The seller is "dkspopart" and is located in this country: US. This item can be shipped worldwide.