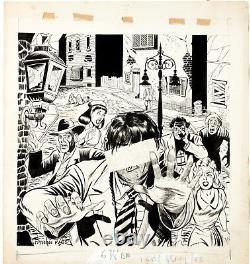 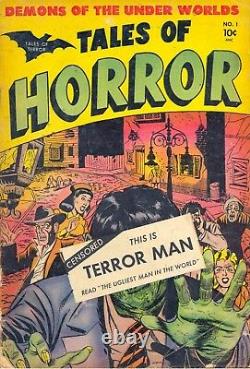 Original Art to the cover of Tales of Horror #1 (1952) drawn by the hand of Myron Fass himself. While in later years he became famous as a publisher of the largest array of magazines out there, he was also an excellent, albeit underappreciated, artist. Unbeknownst to most, since his image was mostly obscured on the printed comic, Myron drew an image of himself into this classic cover (the guy with his hand on his face to the right of the lamppost). On the final printed artwork, Myron's mug was mostly edited out, while the full face of the pretty blonde was drawn in. Sensational covers were the rage in the pre-code comic days, and the "censored" box was sure to cause all the boys to flip through this comic, curious to see what the "Ugliest Man in the World" looked like. Myron was the ultimate comic salesman, and this cover shows him at his best. Signed on the bottom left by Myron Fass.

Page is in very good condition with mild toning along the edges and 5 spots of tape residue at the top, all off the image area. Otherwise the page is off-white and rather bright for a 70 year-old piece.

Comic image is for reference only. The item "TALES OF HORROR #1 (1952) Original Cover art Myron Fass Mystery Halloween comic" is in sale since Wednesday, October 24, 2018. This item is in the category "Collectibles\Comic Books & Memorabilia\Original Comic Art". The seller is "benkin" and is located in Staten Island, New York.