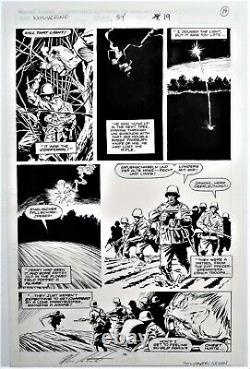 Wolverine #34 Page 19 Historic Origin. Art Featuring Wolverine During His Time As A. Corporal In The Battle Of Normandy Back In.

He Is Seen In The First Panel & Then In. Last Panel With Him Charging A Bunch Of. Nazi's With Just A Knife. Time His Past Is Revealed.

Wolverine has decided to cleanse his soul and theres nothing better to do that than to go back to your roots. In this case, he is Buffalo Woods state park in northern Alberta. He thinks back to when he prowled these same woods like an animal. He is then approached by two Mounties - Dooling and Morris.

They inform him of a deranged killer named Ike running around these mountains with a young girl as his captive. Wolverine offers to help them out and they accept. As they drive along the path to get to Ike, Ike shoots them with his rifle and kills the younger of the Mounties, Morris.

Published Original Art On 11x17 Comic Art Board. Art Is In Excellent Condition. The item "Wolverine #34 Page Original Art Logan Historic Origin Art Marc Silvestri X-Men" is in sale since Friday, May 1, 2020. This item is in the category "Collectibles\Comics\Original Comic Art\Interior Pages". The seller is "codec561" and is located in Boca Raton, Florida.